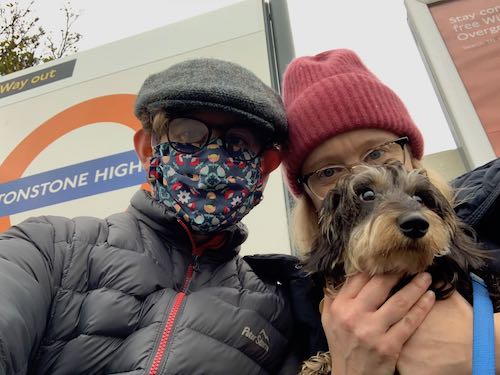 2020 is almost over. A year that will forever be remembered as that one lost to a global pandemic, people dying, many getting ill, and the March that never ended.

But many other things happened as well, and this year note is an attempt at capturing some of those things for posterity.

Although most of 2020 has involved being stuck at home, it didn’t start out that way. I spent the first part of the year crossing the globe.

January started with a work visit to Sacramento.

I got a weekend to explore a cold and snowy New York before travelling up the East Coast to an even snowier Cambridge (MA).

I was supposed to go to Shanghai in February, but we postponed that because of the strange new virus that was starting to spread across China. In hindsight, I think that was the right call.

However, I did make it to Tokyo (where I got to meet a hedgehog called Yukichi). And then to San Francisco.

Ann and I also squeezed in a visit to our favourite place in Northumberland.

A rather packed start to the year.

We’d been talking about getting a dog for a while. We even went to a Kennel Club event at the ExCel centre to meet various different breeds.

With lockdown in full force, I guess it was inevitable that in April, we welcomed Dilys, our miniature wire-haired dachshund into the family.

It turns out that puppies are much harder than I expected. The lack of sleep, biting, teething, pooing. I’m sure parents can relate.

Now 8 months older, it’s a little more relaxing. She enjoys naps in front of the fire, eating cheese and grooming my beard.

In December last year Ann and I bought our first house together.

We’ve spent most of this year putting our mark on it. We’ve painted the living room blue, had a wood burner put in, new built in wardrobes, put things on walls, built a shed and raised planters in the garden (for veg), and ripped out a migraine-inducing bathroom.

2020 is the year I’ve discovered I’m fairly handy with a drill and a mitre-saw.

While we’ve had professionals do some bits, I’ve enjoyed getting stuck in and the feeling of looking at something knowing that I did that.

I’ve spent most of the year working alongside the team at Public Digital, helping to coach teams around the world.

I spent time working with and coaching the team putting together a new website for the State of California – alpha.ca.gov. They went on to deliver a brilliant COVID information site in just a few days.

And there were many others, including EdTech Hub, Surrey County Council, IDEO, Homes England and more.

In a more personal capacity, In October I was appointed to the expert advisory panel for the new Centre for Digital Public Services for Wales. I’m really looking forward to taking what I’ve learnt from GDS and governments around the world and bringing it back home to Wales.

Onto 2021, where hopefully there will be less Zoom calls, more in-person drinks and continued furry co-workers.