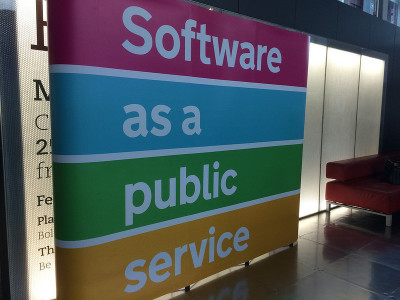 It’s been a fortnight of big announcements.

Mike has announced he’s leaving. Leisa is going home. Tom, Ben & Russell have decided to move on. We’ve also said goodbye to some others – Andy, Lindsey, Sam and Mark.

There’s been lots of noise about what this means for GDS, for ongoing digital transformation, for the future of IT in government.

If I said this hasn’t all been unnerving and concerning, I’d be lying. I’ve spent a lot of time this week wondering what this means for me. Is it time for me to move on – do something new?

Many years ago, inspired by some great people, I started spending time working on various projects using technology to connect people to democracy or building tools to make things simpler for people. Things like (the now retired) CllrTweeps to help people talk directly to their local councillors.

Not long after, Consumer Focus was created. Ed Mayo, the CEO, wanted to try out ways of using the internet to make things better for people. I joined a (very) small team called Consumer Focus Labs. We built some things like RecalledProducts.org that pulled together all european product recall notices into one place; and Stay Private a site to make it simpler to stop unwanted marketing calls and post.

Through Consumer Focus I got involved with the TeaCamp group, the UKGovCamp community, took part in the Scraper Wiki Hacks & Hacker’s hackdays and helped encourage new developers at Young Rewired State.

Four years ago I watched as Martha published a report and a small team led by Tom & Richard built alpha.gov.uk. In 2011, I got the opportunity to help build the beta of GOV.UK, and then take it through to live in 2012.

For the last two and a half years, I’ve been travelling back and forth to Swansea helping the DVLA build new public services and make some of the biggest changes to their technology in 25 years.

I’ve spent over a decade working in civic technology.

I’m looking forward to getting back to GDS in October and taking on the next challenge.

We’ve barely scratched the surface of what can (and needs) to be done to make things better for people. There’s plenty more to do. Louise has talked about that more eloquently than I ever could.

We’ll miss those that are leaving. I’ll especially miss the advice and support Tom has given me over the last 4 years. However, the work will continue and a bunch of really good people all over government will continue it.

So, for now, thank you Mike, Tom, Ben, Russell and Leisa for getting us to where we are. And thank you to all the others along the way – Tom Steinberg, Ed Mayo, the TeaCamp community, Dave Briggs, Steph Gray and the UKGovCamp community, Martha Lane Fox, the team that built alphagov, the team that worked on the beta and helped put it live, the teams that worked on transition, the teams that worked on the 25 exemplars, the teams building prototypes and beta platforms, all the teams out across government that are building and supporting great digital services and everyone else who’s names I’ve forgotten to include.