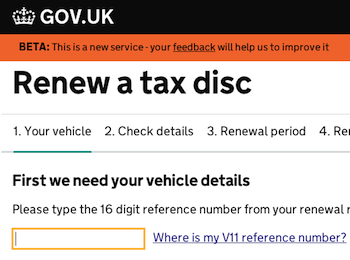 This afternoon, one of the projects I’ve been working on in Swansea launched into public beta.

For the past 3 months, I’ve been working with a small team at the DVLA to look at how we can make the process of buying tax for your car online simpler.

Taxing a car online isn’t exactly new – the existing service launched in 2006 and 54% of cars are already taxed this way.

What we’ve done is take the existing service and look at where we can make the process simpler. We’ve removed steps that were no longer necessary, stripped back the screens to make it clear and made look more like GOV.UK.

The team has also made significant changes behind the scenes – changes that will make it easier for us to iteratively improve the service on a regular basis.

We’ve been working in an agile way with user stories and two week sprints. And we’ll be continuing to do this over the next few months. We’re collecting feedback and data from both the beta and existing services which we’ll be using to identify and prioritise more improvements.

Hopefully you’ll see lots of tweaks and improvements as we prepare for much bigger changes coming in October.

It’s been great to work with such a small and enthusiastic team. I’m looking forward to see how the beta progresses over the next couple of weeks.

If you need to tax your car anytime soon, please give the beta service a go and let the team know what you think.

Oh, and if you need to declare your car off-road (SORN) or want to know more about a vehicle, we’ve given those services a bit of a makeover as well.

Well done to Bethan, Matthew, Emma, Craig, Dianne, Simon, Nic, Mark and Ian (and anyone else I’ve missed) for getting this first step done so quickly.

One comment on “Simpler, clear and faster car tax online”