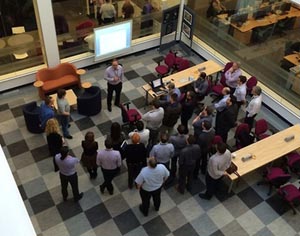 The last few weeks have involved lots of spinning plates.

Two weeks ago GOV.UK reached one year old. We celebrated in the traditional way with blogs, cake and beer.

Building out the new DVLA cloud infrastructure is ongoing. The View driving record team has started and completed the first stories focussed on Identity Assurance. There has also been conversations about network connectivity and the wider DVLA technical transformation plan.

In addition to that, I’ve been involved in some conversations about paying for a tax disc by Direct Debit. This is something that was talked about a while ago and lots of work has gone into it so far. It’s a fairly complicated thing both from a legal and technical basis. I’m looking forward to sticking my oar in from a technical point of view over the next couple of weeks.

Keeping with the tax disc theme, for the past few weeks we’ve had a small team of internal DVLA developers looking at how they can make the process for buying a tax disc easier. It’s a pretty simple service already, but there are some steps we can probably remove and some language we can make simpler.

This week the team showed off what they’ve done so far. In just two weeks they’ve put together running code showing what could be done. It’s always great to see what a great team like this can achieve in such a short period of time.

After the show and tell, I spent some time with them putting together the backlog of the work needed to complete these improvements. Hopefully we’ll be able to share some of their work soon.

This week I was also involved in the first of several sessions to pick an SME to work with DVLA on the Vehicle management and Personalised registrations projects. We hope to have a team in place to start building an alpha for these in the next few weeks.

Finally, the View driving record team has said goodbye to Ruairi, one of our lead developers. He’s been part of the team since January and has done a great job helping to put together our beta service.

Photo above from Julie Hendry