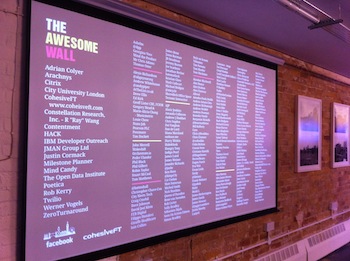 The last couple of weeks have been dominated by one topic – infrastructure. As mentioned in my previous week notes, we’ve been designing and building out the production infrastructure for the View Driving Record service at DVLA. Lots of effort has gone into talking to suppliers, designing what we need and spinning it all up.

We’ve been working closely with colleagues from GDS and HMRC who have used similar patterns and who are also in the process of spinning up their infrastructure services. This is giving us the chance to learn from each other and avoid repeating mistakes or falling down rabbit holes. All seems to be going well, but we’ve got at least another couple of weeks of this ahead.

I’ve also spent some time working with the GDS Identity Assurance team on what we need to do to hook the View Driving Record service up to their upcoming beta. David Illsley, one of the technical architects on the project visited Swansea to help us plan out the required stories and get a feel for how much work we need to do.

This week we were visited by Ben Terrett, Head of Design at GDS to look at how we can make the process for getting a tax disc simpler. It’s already a pretty simple (and well liked) transaction, but we think a few simple changes could make it even easier. We started looking at this last year but got caught up in other things so it’s good to come back and take a fresh look.

Also this week I’ve been involved in a ‘show and tell’ where DVLA project managers have given us an overview of each of their technology projects. It’s amazing to see the sheer amount of work going on, but also how complicated the technology estate is which makes it very difficult to change. This piece of work will eventually lead to plan to transform the estate to something that is much simpler and easier to change.

Away from DVLA I had a chance last week to pay a visit to VOSA and see the work they are doing to transform both the MOT and Operator Licensing services. They have several small companies working together in an agile way to build the new services. I’m hoping to get them and DVLA talking together more so we can learn from each other more.

Two weeks ago I got to speak at Shropgeek (R)Evolution, a fantastic web conference based in Shrewsbury. I spoke about how we built GOV.UK and our design principles. The talk seemed to be well received and I got lots of good feedback. I’m hoping I get to do more talks like that over the next year.

Finally, late this week I went to the opening party for the Shoreditch Works Village Hall, a new event space in central London. The space was funded by people on Kickstarter – myself included. It’s great to see more spaces like this become available. I hope that this is a pattern that continues outside London in places like Cardiff and Swansea.