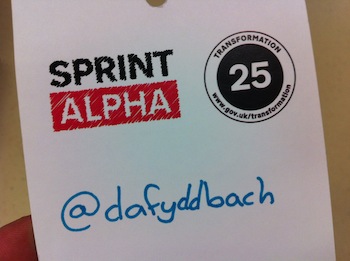 Some belated notes from last week.

The week started off with a very quiet few days in Swansea. Lots of people were away for various reasons so, for me, it was pretty unproductive. I did however get to spend some more time with the contract team and see the latest show & tell from the view my driving record team.

Wednesday was the biggest feature of the week with our Sprint Alpha event. It was a chance to show off everything that GDS has been doing with transactions across government. Filled with a mixture of civil servants, press, permanent secretaries and ministers we had a chance to update everyone on what we’ve been up to and what comes next. We’re working on 25 services across government, including 3 (view driving record, vehicle management and personalised registrations) at DVLA.

The view my driving record service also underwent it’s first Digital by Default Service Standard assessment. We wanted to get an assessment in early to help us judge where we should be focussing our efforts in the run up to our public beta. We should get the results from that assessment today (Monday).

Thursday was our monthly all-hands meeting at the Royal College of Surgeons. We were shown some great work done by the Office of the Public Guardian on the Lasting Power of Attorney service and from DfID on their Development Tracker.

On Friday I spent a bit of time with my former GOV.UK team to get their design feedback on the view my record service we are building. I also spent some time with the Performance Platform team about dashboards for DVLA transactions and had a chat with the ODI about their midata project.

I’ve got lots of time off and a training course next week so there probably won’t be any week notes. See you at week 14.