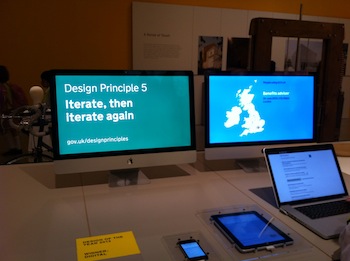 After the last few manic weeks, this week was a chance to slow down a bit and take stock of everything that has been going on.

On Monday I and a bunch of technical colleagues met with the DVLA team leading on their ICT contract let (a piece of work to split up their existing IT estate). We took at look at the work their team is doing and made some suggestions on how to proceed.

This is going to be a big area of work for DVLA over the next few years as they try and strangle down a very complex technical estate to make it easier (and cheaper) to run. The work we do on the IEP and Vehicles transformation projects are also going to have a big impact as we seek to build new digital services around those legacy systems.

On Tuesday I finally got the chance to go to see the Design of the Year exhibition at the Design Museum (which GOV.UK won). While we were there a group of school children were doing some sort of exercise which involved them using the GOV.UK site. Interestingly, every child went straight to the search box and typed in ‘Pokemon’ and ‘Minecraft’ before going to do what they were meant to be doing. It’d be interesting to see if there was a spike of searches for those terms this week or if it’s something that happens all the time.

Later in the week we had a retrospective of our first wave of Digital by Default assessments. These look at new digital services to see how well they are meeting the Digital by Default Service Standard. We’ve conducted several of these assessments over the last couple of weeks with varying outcomes. Although the standard doesn’t officially come into force until April next year, we’re starting assessments now so we can help improve things being build across government and improve our approach.

On Thursday we spent some time with Julie reviewing the IEP project and it’s progress. Steve and I have been heavily involved in the Vehicles (and now Contract Let) stuff recently so we haven’t had much bandwidth to look at IEP. Thankfully the team is still working away producing good stuff. There are things to fix and improve, but that will always be the case. Hopefully I can spend some more time with the team next week.

We also had a chance to spend some time with Peter G from DfT to give (and recieve) an update on everything happening at DVLA, VOSA, DSA and DfT.

On Friday James gave a talk to people at GDS about how the bits of GOV.UK fit together and why the apps are they way they are. It was a nice reminder of how far we’ve come since I joined in September 2011 to work on the beta.

Throughout the week I spent some time planning and putting together a talk for the Civil Service Live conference in Bristol on Wednesday next week. I’ll be leading a panel talking about Digital by Default with colleagues from DVLA, DWP and Bristol City Council.

Finally, on Friday night I got to join in on a gender-neutral hen-party to send Thayer off to married life. Lots of nice food, drinks and then dancing at Ministry of Sound. A good end to the week.