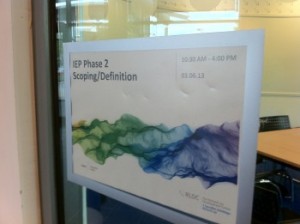 This has been a week filled with workshops.

On Monday I spent the day at the Richard Ley Development Centre (RLDC) in Swansea. The RLDC is the DVLA’s conference and training centre. It’s perfect for workshops and planning sessions – there is lots of space, lots of whiteboards and Wifi!

As part of the driving licence project I’ve been working on, we’ve been building a bunch of services to handle lots of queries against the DVLA’s driver databases. We spent Monday looking at the systems that currently (and might in the future) make queries for this data. The aim was to identify which services might be next to transfer over to the new platform.

This week we finished sprint 9. At the showcase we presented some futher tweaks to the public facing elements based on user testing, some new types of convictions we are handling and some work on building smoke tests – similar to GOV.UK’s smokey tool.

On Wednesday we were visited by the GDS Performance Platform team. They were down talking to DVLA about how we could collect and report metrics on how people are using the various driving/vehicle transactions. We also spent quite a bit of time looking at the enquiry service so we can hopefully produce something similar to the Licensing performance dashboards on GOV.UK.

As mentioned last week, from Wednesday GOV.UK started linking out to transactions provided by Welsh councils. A big thanks to Alex and others (including Louise at LocalDirectgov) for pushing this through. (I know the transactions still say ‘Available in England only’ – this will be changed very soon)

On Friday we had our monthly GDS technical architects session. We got to see the work being done by
teams at DWP and the Home Office and got to talk about some common patterns that are emerging.

I was also part of a team that conducted a Digital by Default Service Standard assessment of a new
Home Office tool that should be going live soonish.

Finally, I spent a bit of time getting ready for the discovery workshops we are holding in Swansea
next week to look at the next set of transactions we will be working on at DVLA.