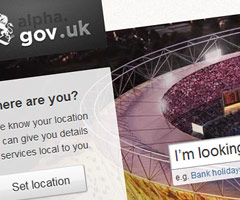 Just under two and a half years ago I joined CF Labs – a new team based within Consumer Focus with a remit to build useful online tools and make data more useful and accessible.

Over that time, we’ve worked to make product recall information more useful and helped to make it easier to reduce cold calls and junk mail. I’ve been able to work with Consumer Focus’ energy team to publish complaints data on energy suppliers, the Wales team to publish performance data for the Royal Mail, and Passenger Focus to help open up rail performance information.

There is still a lot more to be done, however shortly I’m going to be taking a break from Consumer Focus and embarking on a new challenge.

I’m delighted to announce that from the end of this month I’ll be joining GovUK – the team in London working to produce a single website for government.

GovUK has already put together an initial prototype for the website (AlphaGov) – but they are now working to produce a much more in depth second (beta) phase.  Over the next few months, we’ll be putting together a public beta of the main citizen-facing aspects of Gov.uk.  We’ll also be developing a private beta of a shared  ‘corporate’ publishing platform (for government departments) and a draft Global Experience Language for all government sites. The Cabinet Office has built up an impressive and extremely talented team to put the site together and I’m honoured to be able to join them.

If you want to know more about the project, take a look at the project’s blog and the initial prototype.

3 comments on “Helping to build a single domain for government”