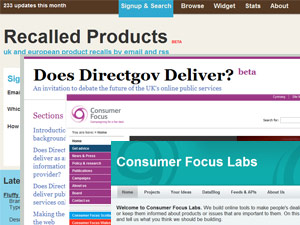 Just over a year ago I joined CF Labs as one of the developers working on innovation and making data publically available. When I started, Consumer Focus was a pretty new organisation still getting to grips with its role and getting everything into place so it could undertake its duties properly. In the middle of all of this fun, the three man CF Labs team was put together to experiment with a new way of doing things.

Since day one it’s been a non-stop rollercoaster. After my previous role, I wanted a challenge – something I could really get my teeth into. You certainly can’t say the last 12 months haven’t been challenging!

Our first few months were spent getting ourselves set up and figuring out our role. I made the switch from Windows and ASP.net to Linux and PHP. We built the Recalled Products website as our first project. We talked to all sorts of people and attended events in London and Cardiff.

After a while, we realised that although some colleagues understood what we were doing, many didnâ€™t have a clue. They had a vague idea that there was a “web team” based in Cardiff, but not much else. This was exasperated further when they found out that we were a “web team” that didn’t work on the organisation’s own website but did this other stuff that they didn’t understand.

We found that this lack of understanding was creating barriers to our objectives, so we refocused our efforts within the organisation. We continued on some of our original ideas, but looked at how we could make people aware of our way of thinking. This led to us taking over the corporate website and removing some of the issues that were causing confusion. Since then we’ve talked and talked and talked to anyone that will listen; we’ve gotten involved in policy discussions; and helped with producing reports.

Now, a year after starting, we are starting to see things falling into place. We’ve got teams regularly asking us for advice and suggesting things we can do. We have a huge number of projects underway and we’ve got more work than the two remaining team members can shake a stick at. Over the next few months we will hopefully start to see the benefits of our change in focus.

Looking back, it’s amazing how far we’ve come. It may not seem like much to most people, but we’ve made huge strides forward. It’s been frustrating (very frustrating) at times, but at the same time very rewarding.

In the last 12 months, the whole innovation & data agenda has moved on rapidly. We’ve seen the appointment of Tim Berners-Lee, the launch of data.gov.uk and the creation of the Institute of Web Science. The Greater London Assembly has released its own store of data, Ordnance Survey data is being opened up and people are finally starting to recognise the benefits.

Of course, we still have a huge way to go. A few people still don’t understand the concept – some might even feel intimidated or threatened by it, but we will get there eventually.

So did I make a mistake jumping to public service? I don’t think so. If you’d asked me this afternoon I’d probably be giving a different answer. I have bad days like everyone (today was a perfect example), but overall it’s fantastic. I love the job – I get to build websites, design systems, go to events and meet interesting people, but most of all I get to influence the way people think about technology, the web and data. It’s frustrating at times but challenging.

What advice can I offer to any organisation wanting to set up a similar team?