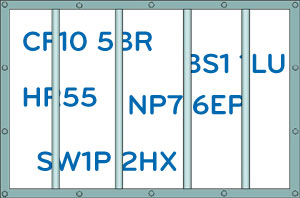 The Royal Mail is well known in the UK for being an outdated organisation that is struggling to modernise, is regularly hit by crippling strikes and always seems to be losing money (despite the fact they made a profit recently?!). However yesterday they took on a new tact: they appear to have decided to bring the rest of the UK down with them.

The issue surrounds a small piece of text – the Post Code. It sits at the bottom of every address (similar to the Zip code in the USA). It is the holy grail of data in the UK. It maps each place in the country to a physical location. The Royal Mail uses it to assist with routing mail from A to B, developers use it to verify addresses and locate other services nearby. Unfortunately, access to this database costs thousands (approximately £3800 per website per year).

Enter ErnestMarples.com – a website that provided access to the postcode database to not for-profit websites for free. A developer could submit a Post Code to the API and get the appropriate longitude and latitude back in return. Although the legality of the site was questionable, it was used by a large number of sites similar to CllrTweeps. These included PlanningAlerts.com, JobCentreProPlus, TheStraightChoice, HealthWhere and so on.

Planning Alerts used it to good effect. It allowed you to sign up for email alerts of planning applications that were submitted near you. How did it work this out? By mapping your Post Code to a physical location. The site was so successful that other sites have cropped up that disseminate its data through other communication channels.

Unfortunately yesterday, the Royal Mail threatened legal action against ErnestMarples and the site was taken down. As of yesterday, all the above sites have gone offline too. Sites of real value to people in the UK have been taken down because of the Royal Mail’s actions.

Now some people will argue that they shouldn’t have been using a dubious source for their data. But as I’ve explained before, they don’t really have much choice. It is a case of using a dodgy dubious source, or not building the site at all. None of these sites were run on a for-profit basis. None of them had a spare £4000 lying around to buy the license.

The Royal Mail claims that they were losing money because of the site (although they have yet to answer enquiries about how much they’ve actually lost). I’m sceptical about this – none of these sites could have afforded to buy the data anyway, so how they could have lost money I do not know!

Lets not forget that the database was created using public money through taxes paid for by the people of the UK. This is public data that is of benefit to the whole of the UK.

By closing down this site and refusing to provide a not-for-profit licence for their Post Code database, the Royal Mail is stifling innovation in the UK.

Last week I attended the Future of Web Apps conference in London. I was amazed at how behind we are in the UK compared to the USA when it comes to innovation. I’m now convinced it is partly due to the failure of organisations like the Royal Mail and Ordnance Survey to modernise. They are acting in the same way as the music industry and trying to stop innovation rather than cultivate a mutually beneficial environment.

I’m sorry to see PlanningAlerts and The Straight Choice die. But maybe it will be the kick up the backside that the UK needs to get its house in order.

Until the Royal Mail releases its Post Code database with a free (or very very cheap) not-for-profit license, we will never have a Digital Britain.