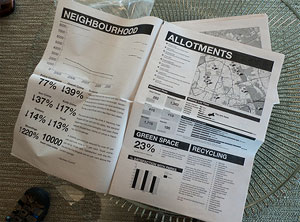 In Govilon, we’ve tried to make this process easier. We’ve launched a “Village Information Pack” (VIP) – a small A5 folder which is delivered when someone new moves into the village. The pack contains a list of community groups and services offered in nearby villages (post offices, libraries, leisure centres etc). It lists bus times, school term dates and opening times of the shop & pubs. We also allow local businesses to put in a leaflet about their services.

The initial version of the pack was delivered to every house in the village, and updated ones are delivered by volunteers whenever we hear about someone moving in. So far it has been well received.

Recently, the Government began the process of opening up its datasets in a similar way to Data.Gov in America. The Newspaper Club has taken some of this data and produced a prototype of an information pack for people moving into a new area. It gathers information about local services, environmental information and crime statistics from the Government’s datasets and presents them in a small newspaper. They’ve also gone a step further and included maps, travel times to certain locations, NHS information and council details.

This is a fantastic idea and makes really good use of data which was not previously available. It shows what can be done when you make public data available for free. Something like this would really complement the village information pack we’ve created for Govilon.

You can find out more information and some pictures of the prototype on the Newspaper Club website.