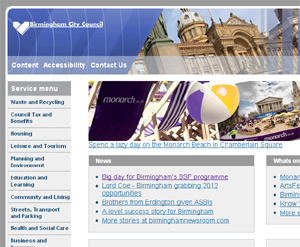 There has been a lot of talk on Twitter today about the launch of the new Birmingham City Council website. Without a doubt, Birmingham have successfully launched one of the most delayed and expensive websites of the last few years. After being delayed for 6 months (original launch date was expected to be March 2009), and going significantly over budget (costing a total of £2.8 million), you’d expect the site to be the best thing ever developed.

Unfortunately it isn’t. The site is riddled with problems; suffers from poor build quality, lack of thinking, and technology that wouldn’t be out of place in the early part of this century. Here are just a few of the problems I’ve come across after browsing the site for a little over 10 minutes:

In thought I’d take a very brief look at a few of these.

There really is no excuse for not using SEO optimised URLs on a public site anymore. Your URLs should be human readable and understandable. This helps with not only search engine optimisation, but with your website’s users as well!

Unfortunately this website has stuck with the horrible model of using exceptionally long and completely indistinguishable URLs throughout the system. Here is an example of one of the pages:

I count this URL at 166 characters long – a simplified human readable URL for this site could be as low as 47 characters long (http://www.birmingham.gov.uk/transport/highways)

From the first URL, I have no idea where that page really goes; the second URL is much more obvious.

Almost all incoming links to the website have been broken with this re-launch. Even the Google Sitelinks which appear when you search for Birmingham City Council no longer work. This is not only bad for search engine optimisation, but any bookmarks or links to content on the site will no longer work.

This is probably the most disturbing part of this website. While looking through the website, I’ve come across title tags such as “BNE /cs/Satellite/v?packedargs=AlphabetValue%3DA&amp;rendermode=live“, “TLE contactus“ and “BNE copy“. These links go to the A-Z website index for the letter A, a contact us page, and the copyright statement respectively. The first is quite obviously the most incomprehensible, but I’d love to know what the TLE and BNE stand for in the others.

Title attributes are really important – these are used by screen readers (the sorts of things used by those with no or poor visibility) to identify where a link goes. Without a descriptive title tag, you have no idea where you are going.

Alt attributes are equally important – these describe the content of an image if the viewer can’t see it. There are quite a few images around the site with no, or incomprehensible alt attributes.

Like the SEO URLs, there is absolutely no excuse for this – in fact, its purely negligent.

This is less important, but I felt it had to be said. There are no RSS feeds whatsoever – who builds a website with no RSS feeds?

This website cost a lot – significantly more than any other website I’ve come across. It is badly built, suffers from accessibility issues, and it generally pretty poor. To whoever signed off this development – you should be taken out and shot. To the people of Birmingham – I’m sorry, but you’ve been had. Your money has been wasted, and you should hold your council to account for this farce at the next election.